The football game has cemented its hold as the most popular game in the world. As such the sport has grown to be one among the most respected sports that have affected the lives of many people in one way or the other.

During the FIFA 2010 world cup, for instance, FIFA the organizing body in charge of soccer in the world launched a program in collaboration with UNICEF. The program was intended to reach unfortunate kids across the world especially kids from remote areas in the developing world. Through this program, FIFA constructed hundreds of schools with soccer fields in front of them. The main objective was eradicating poverty by allowing the children to access education and giving them a chance to better their skills in football become champions and better their lives and those of their people. Besides this, there are many basic benefits of soccer for kids.

One of the main benefits of soccer for kids is teaching them the importance of regular exercise.

The soccer sport is basically an aerobic game. The game involves as much as many cardiovascular exercises as possible. Getting children involved in the sport helps them maintain their general health, a healthy lung, and heart as they grow. 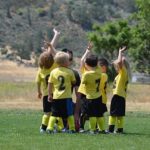 Playing soccer the kids are required to be fit and agile they will be forced to sprint after the ball and other players.

It is thus essential that the kids get involved in regular training. Regular training will help the kids build muscle strength particularly around the leg regions as well as improving their energy levels over time.

Unlike in other games, for standard soccer matches, players are forced to hit 90+ minutes of sprinting and running.

it is thus essential that players have a high stamina to keep them strong and active for the rest of the time they are in the field. An improved stamina and energy levels are not something achieved overnight but a result of regular training and practice.

Remember to check soccer gear like https://www.r-gol.com/en/puma-gloves.html and https://www.r-gol.com/en/football-masters-gloves.html from our partner – R-Gol.
The benefits of soccer for kids go beyond physical fitness. When children, for instance, join a sports club remember they are not going to play on their own. They will be forced to join a team and be forced to work to the success of the team making as much contribution as possible. Here the kids will learn social skills and make new friends as they come into contact with people of diverse backgrounds.
Since in football players work as a team, the kids will be forced to work together so as to make an impact on the team. Here they will learn to communicate to other team members, better their communication skills, learn to appreciate the importance of working for a team and lastly learn transferable skills from other players that will make help them continue bettering their skills.
Lastly, soccer is also instrumental in instilling discipline in kids. The game in the place is discipline oriented, it involves 90+ minutes of endurance so, it requires a really strong will to sustain the pressure within. Besides once an error is committed to soccer it comes with heavy costs.

Categories of my posts